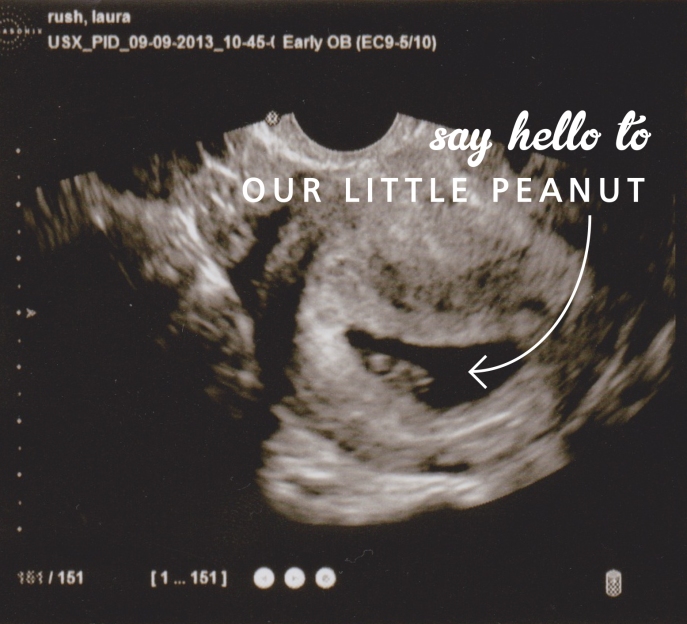 BABY IS THE SIZE OF A RASPBERRY

DEVELOPMENT: THE BRAIN IS RAPIDLY DEVELOPING AND A FULL NERVOUS SYSTEM IS BEING CAREFULLY ORGANIZED. A TINY NOSE AND UPPER LIP MAY NOW BE MORE PROMINENT. ARMS AND LEG BUDS ARE NOW EMERGING.

TOTAL WEIGHT GAIN: ALL OVER THE PLACE, ONE DAY 1 LB THE 0 LB AND ANOTHER DAY 2LBS, I THINK IT IS WATER WEIGHT AND BLOATING. (HOPEFULLY)

SLEEP: MORE RANDOM AND VIVID DREAMS AND WAKING UP TO PEE ONCE A NIGHT

MISSING: NOT BEING ABLE TO FEEL FORCED TO EAT, AND NOT FEELING NAUSEOUS ALL THE TIME

CRAVING: STILL, NOTHING! I STILL DREAD HAVING TO EAT WHEN I WAKE UP IN THE MORNING

FEELING: NAUSEOUS, BUT HAS BEEN GETTING BETTER THE PAST TWO DAYS, HOPEFULLY IT CONTINUES TO GET BETTER. I ALSO FEEL SO BLOATED!!

BEST MOMENT OF THE WEEK: 2 THINGS – TELLING MY PARENTS AND SEEING THEIR REACTION AND HAVING A GOOD OB APPOINTMENT AND GETTING TO SEE THE BABE’S HEART BEAT!

LOOKING FORWARD TO: OUR NEXT ULTRASOUND IN 3 WEEKS!! AND OF COURSE FOR THE MORNING SICKNESS TO GO AWAY.

Today was our first 8 week appointment with my OB/GYN. Everything went really well, Cory was there with me, so it was nice to have him there to see our babies heart beating, it was crazy to see it’s tiny little body!
Our doctors name is Dr. Flowers and he has raving reviews all over the internet, so of course I chose to go to him, and his last name was a plus as well. He seems like a great doctor as well and answered all my questions and concerns. Our next appointment is in two weeks and we will be getting another ultrasound to see how baby is growing and developing!

In other news, I finally sent our pregnancy announcement card to my parents last week! They got it on Wednesday and we Skyped with them as they opened it. I was trying to record my screen so I could get their reaction, but sadly it didn’t end up recording. It was really sweet though, the front of the card said “Hey Mom & Dad! Someone has come to visit you” with the storks butt poking out (see pictures below) and then when they opened it, it said “hello there, I have a special message to deliver to you…” and then there was a picture of the stork holding a little bundle with a scratch off for them to scratch off with a penny I provided in a mini envelope and inside the bundle it said, “we’re expecting! April 2014 (stay tuned for the gender)”. As my parents were opening the card it was so fun to watch their reaction. My dad opened the card and scratched the gold ‘scratch off’ off and as he began to read that we were expecting he couldn’t even finish saying it without chocking up. It was very sweet, both of my parents began to tear up, which made me tear up a bit and we were all very joyous! It was a very tender moment to share with them and gammie and gramps are very excited to add another niece/nephew to the family!

After our appointment today, Dr. Flowers said the heart was beating really fast which was a good sign that a miscarriage is at a lower percentage, but at our next appointment he said we will be able to determine if a miscarriage is pretty much not going to happen. (Crossing our fingers!) So we told the rest of my family and sent a picture of the ultrasound and I told my 4 best friends, so it was a good day!

This entry was tagged 8 weeks, baby, pregnancy. Bookmark the permalink.